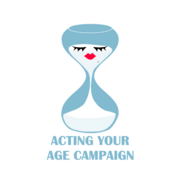 The Acting Your Age Campaign (AYAC) launched 4 years ago to highlight and challenge the lack of meaningful representation of women over the age of 45 in the UK entertainment industry and to drive meaningful change for all women.

All initiatives for 50: 50 Gender Equality should include age but currently don’t, which means that up to the age of 45 on screen representation in the UK between men & women is roughly equal.

However, over the age of 45 the picture worsens exponentially, for women. as documented by OFCOM repeatedly. This is the Acting Your Age Campaign (AYAC) parity pledge which we want the entertainment industry to sign up to – equal representation of men & women of all ages, or put another way, “50:50 from 45”.

Last year the BAFTA TV awards couldn’t find a single woman over the age of 38 for their leading TV actress category. Despite a crucial and beautifully diverse line up of actresses, all of them were under 38. In the men’s equivalent category there were two men over the age of 45.

When AYAC did a deep dive of the BAFTA TV awards over the previous 21 years of those awards, the average age of nominees in the Leading TV actress category had fallen from average age 52 to a shocking average age 32.

In the men’s Leading TV actor category, the average age of nominees had fallen too but only from age 48 to age 45, which means that men can continue to work comfortably within their playing age, and women can’t.

AYAC have been repeatedly told by writers submitting many scripts and ideas for dramas, comedies and features, that the ages of the leading characters are routinely aged down by commissioners, producers and production companies, particularly the age of the female romantic leading actress

AYAC met with BAFTA and they agreed, as is often the case, that this is a problem in the industry. This year AYAC was gratified to see that this unofficial “upper age limit” hasn’t happened in the leading TV actress category.

Only to be dismayed to find it is the case in the leading TV comedy actress category. Once again, no woman has been nominated over the age of 38, whilst once again that isn’t happening in the same category for men.

To that end and following some pretty grim conversations AYAC has had with commissioning editors, producers, broadcasters, organisations and unions over the 4 years of the campaign, AYAC recently drew up a list of aims for broadcasters, productions companies and news producers.

Ones which offer solutions and keep gender parity in terms of women’s age, on a par with their male colleagues.

It's what AYAC calls a parity pledge, one which several notable male actors have signed up to and one that needs to happen now, because ageism targeting women is an entrenched industry staple which is outdated, harmful and neglects the millions of audiences who appreciate seeing women over 45 telling the stories of our lives.

A woman’s talent isn’t dependent on a calendar and it certainly isn’t the case for men.

The parts offered too, to older women, are too often so narrow and stereotypically negative as to be stigmatising in and of themselves.

As male filmmakers prizing a woman’s youth and beauty are joined by young women filmmakers with a seemingly endless list of mummy issues. We don’t need yet another older mother with no sense of humour, or entrenched in bigotry like unredeemed homophobia, or the apparent “cause” of her daughter’s mental health issues.

The patriarchal favouring “saintly father” and the matriarchal stigmatising “monstrous mother” is a tired and boring misogynistic trope; seemingly there to provide conflict which as with all areas of under representation and narrow representation needs to be limited.

This isn’t an attack on artistic freedom. This is highlighting that too often, excluding older women is enabled through the cloak of artistic choices.

The AYAC is appealing to news and current affairs programming to include women over 45 in all reporting on women’s rights and representation.

Currently on screen in the U.K. men have a whole life and women only a shelf life.

1) All onscreen fictional content/ light entertainment programmes with male and female leads/presenters should have 50:50 equal gender and age representation. (In drama and comedy - including romantic and platonic leads)


2) All writer/performer dramas and comedy commissioning should feature 50:50 age and gender parity in programming (not just older men/young women)

3) All diversity initiatives across all broadcasters should ensure a range of representation based on age as well as race and ethnicity, gender, LGBTQ+, disability (EG not just commissioning of stories about young, disabled people this should include children’s programming/presenting)


4) There should no longer be an upper age limit on any new writer schemes/talent searches. (In the case of the BBC representing all audiences’ forms part of the established charter, this includes women aged over 45)


5) Age should become a mandatory requirement for all broadcaster diversity monitoring (off and on screen) to ensure representation of women over 45. This requires government involvement and an amendment to existing legislation


6) Presenters of documentaries should be represented equally. 50:50 gender initiatives should include age parity between women and men over the age of 45. (Developing new to screen talent/directors should include women over 45)


7) All contributors to political panels/discussions/news packages/studio guests should feature 50:50 age parity of women over 45 in line with men and young women. (A panel of only middle-aged men and young women is dated and unrepresentative)


8) News pieces on women’s physical and mental health, violence against women and appearance-based news (EG self-esteem, impact around filters, cosmetic procedures, and appearance shaming) shouldn’t have exclusive bias towards young women. There should be 50:50 age parity for women over 45.


9) Celebrity based/entertainment news should feature women and men over 45 equally in terms of achievements and obituaries of women should use recent photographs as with men.